Last year LogicInk debuted its UV temporary tattoo, which changed colour to tell you when you’d had enough sun. At the time, LogicInk was looking at what other uses its tattoo tech could be put to, but wanted to focus on the UV first. The UV temporary tattoo is now complete, and the company has launched a Kickstarter campaign to leverage its existence in an interesting way. For at least $14 you can get two UV tattoos by November 2018. However, for LogicInk, this is about taking it to the next stage.

Carlos Olguin, LogicInk co-founder and CEO, tells that the company wants to use all its Kickstarter proceeds to fund new temporary tattoos that focus on hydration, blood alcohol level, pollution and more. The UV is an example that the company can deliver technologically advanced tattoos. As a quick reminder, the UV has two rings: the inner ring tells you how harsh the sun is by turning from white to purple; while the outer ring will tell you you’ve had enough sun by turning from pink to purple. 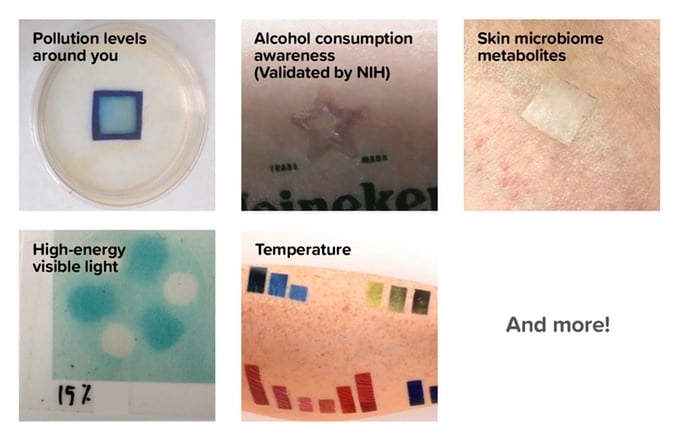 Then there’s the hydration sensor. Olguin says the sensor isn’t just meant for athletes or fitness fanatics, it’s also aimed at the elderly and other groups who might not realise that they’re dehydrated. Similarly, your tattoo would change colour based on how hydrated you are.

These two sensors work by detecting your sweat and the skin voluntiles that come from your skin. The detection of those biosensors triggers a colour change in the tattoo. Olguin says these technologies are part of a larger roadmap, which started by detecting radiation on the UV, particles for the pollution sensor and biomarkers with the hydration and blood alcohol sensors.

The core mission of these sensors, Olguin says, is to empower users to understand how their body is being affected by outside forces. Unlike other wearables, LogicInk’s tattoos don’t require a companion app on a phone. The company is working on one, but Olguin stresses that users don’t have to upload their data to it. He compares it to a regular pregnancy test, where you can keep that information analogue and away from other people or companies.

While the $14 pledge will get you two UV tattoos, the second reward is for pledges $79 and up. This will get you whatever the next sensor from LogicInk is. Which sensor is the company leaning toward? That’s up to the backers, who will get to participate in choosing which technology the company moves toward first.

LogicInk isn’t resting on its laurels with the original UV, however. “We keep improving it, one of the key things we need to improve – even now – is increasing shelf life for an even longer time,” Olguin says.

The company has also been looking at balancing how quickly the colour changes. It’s found that those with sensitive skin like how quickly it tells them they’ve got their fill of the sun, while those without sensitive skin find it moves too fast. That may partly answer a larger question.