Toymaker The Crafty Robot has launched a crowdfunding campaign for its latest design — a DIY robot that can follow you around the house and bring you drinks.

Smartibot is an educational, build-it-yourself toy for adults and children who want to become more familiar with robotics. The Crafty Robot describes the toy as the world’s first artificial intelligence (AI) enabled cardboard robot. The AI it contains is a real-time object-detection system, which means that the small, smiling robot can be taught to recognise people, pets or vehicles and automatically follow them. Alternatively, the kit comes with two variant models of Smartibot that operate via remote control rather than automated AI: a teabot with cupholders to deliver drinks, and a unicorn with a little cardboard horn.

Like previous Crafty Robot kits, Smartibot’s cardboard parts can be attached to almost any object to transform it into a personal droid. The Kickstarter page for the toy shows it integrated into a Lego car and a potato.

Each Smartibot kit comes with a circuit board, motors and battery box. Most of the other parts are cardboard — an important element of the design. Some of the Smartibot configurations demonstrated on the Kickstarter page include an eight-fingered robot that plays the xylophone and a water pistol turret that fires on the family dog. Two add-ons are available for Smartibot — an LED display to add graphics to the design or a board with distance and gesture sensors to make the robot responsive to obstacles and gesture control. The plan is to introduce more accessories in future.

The Crafty Robot launched in 2015 with a crowdfunding campaign for its first cardboard kits. The UK-based company is one of several brands making educational toys with a focus on the science, technology, engineering and mathematics (STEM) disciplines. These have included Technology Will Save US, makers of the BBC Micro Bit, which was distributed to all schoolchildren in the UK. There are also offerings from major brands like Lego alongside start-ups such as Curious Chip. 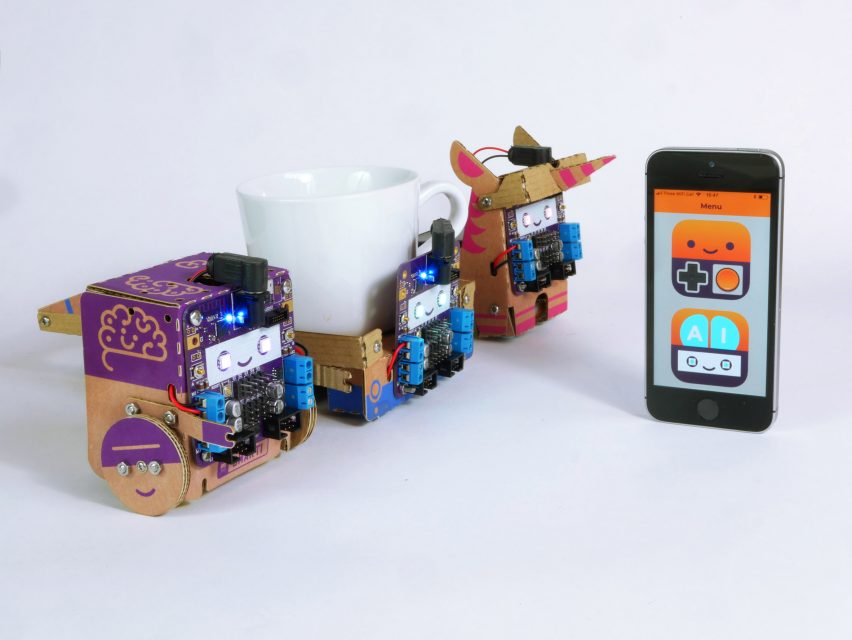 Compared to many of these, Smartibot has less of an emphasis on coding and more on interaction design. The robots’ movements are set within the app environment, although they will also be programmable for users who want further customisation.